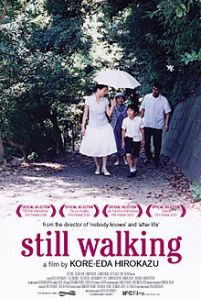 Both released on DVD with Criterion (US)

Both released on Criterion DVD/US

However, now, that I’m in my forties, watching the baby boomers age, not to mention my parents, I understand the nuances of movies focusing on winter years.  And in this double review, I feature the Japanese movie, “Still Walking” written and directed by Hirokazu Kore-eda released in the US in 2008 (Criterion), and the French movie, “Summer Hours” written and directed by a favorite director of mine, Olivier Assayas, released in the US in 2010 (Criterion).

These movies share more in common than dying parents or death themes.  Both directors chose to shoot in natural lighting, documentary-style (more so with Kore-eda than Assayas), and work with an ensemble or what I like to call a “chamber” cast.  Both movies balance dialogue with silent moments in which the characters express emotions through facial gestures and body language.  Neither movie waxes sentiments and both movies stray from melodrama, which actually adds more power to the stories.

While Assayas weds the classic style of Jean Renoir with 1990s moviemaking sensibilities (remember the stylized “Irma Vep” by this director or “Late August, Early September”?), Kore-eda mirrors the classics of the Japanese master filmmaker Yasujiro Ozu (on of my favorite directors).  A touch of humanity lights up “Summer Hours” and “Still Walking.”  But even more touching are universal interplay between aging parents and their middle age sons and daughters.

For instance, in Assayas movie, a mother celebrates a birthday with the premonition that she won’t be around for longer.  She calls to one of her sons played by Charles Berling and she prepares him for her death, by letting him know what to do with art and artifacts belonging to the family when she dies.  Aren’t we all in denial about our parents’ death?

In Kore-eda’s movie we see comical scenes in which the mother tells the middle son Ryoto to take better care of his teeth and towards the end of the movie, the mother goes through a to-do list, including going to a dentist to her son, as the son also tells gives his parents a to-do list of taking better care of themselves.  Sound familiar to anyone reading this over the age of 40?

Both of these movies affected me emotionally and caused me to appreciate my parents more, and empathize with them.  Now, whether or not that was the directors’ intention, who can say.  Both directors had lost their mothers before writing and directing these movies; we as viewers feel their tenderness towards their mothers and even acceptance of those deaths.  The storytelling as well as, the moviemaking comes across as mature and sober.  While I can’t speak for the Kore-eda’s filmmaking career, (this is the first of his movies I have watched), I have seen several of Assayas’ movies, and have watched his talent blossom over the years.  I’m glad he tackled the heavy topic of death, but it wasn’t the first time the director had gazed in this direction since he explored this theme in “Late August, Early September,” a hip and moving film that came out in the late 1990s.

Both movies feature stunning photography, portray several generations while contrasting young children with grandparents.  In Assayas’ movie, it opens with children playing in nature and running through a field and then climbing a tree.  The children represent a future generation who is never questioned about the future of their grandmother’s house and property.  These children seem at home in nature, but either live in far-off China where one of the brothers, Jeremie works for Puma sportswear or they live in the city in France.  The daughter played by Juliette Binoche lives in the US where she works as a designer for a Japanese company.  So this story doesn’t just reflect on the death of a parent, but also a heritage due to globalization and the French Diaspora.

Kore-eda takes a different approach portraying children and the generations.  The mother and father can’t accept their son Ryoto’s marriage to a widow or his stepson.  Ryoto suffers anyway under the weight of his older brother Junpei’s death (he drowned saving a boy) who is always seen as the perfect child, suspended in time.  Even though we can empathise with everyone in Yokoyamas clan, the parents come off as cruel.  Every year they invite the boy (now a man with a troubled life) to dinner so that they can mock him and shower polite hatred on him.  When Ryoto confronts his mother about her vicious behavior, she tells her son that he couldn’t possibly understand since he didn’t have any children of his own–which is just another knockdown comment to her son (there are many in the movie).  But the director could comment who are we to judge since all families hide secrets and cruel behavior behind friendly facades.

I could wax on about both of these movies and I would even recommend watching movies by Jean Renoir, and Yasujiro Ozu to get a better feel for the contemporary movies.  Back when I reviewed movies, I would not only watch the movie slated for review, but any movie earlier that gave shape to the director’s vision.  However, when you love cinema this par-for-the-course.  I recommend these master works of Assayas and Kore-eda.  And if you’re middle age and concerned about your aging parents, these movies provide the balm you need to comfort you.  It’s not easy.