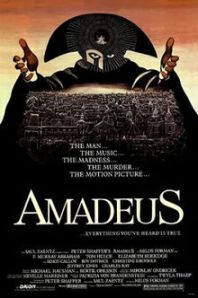 Written and directed by Bernard Rose

Movies and plays portraying the real lives of classical music composers have taught me about the humanity in all of us.  Sure we can think of Bach, and Beethoven as stuffy guys in wigs or we can see them human flaws, gifts and all.  We often view Mozart in a different light–he’s at least a playful child-man filled with rebellious wit.  His music blows the minds of anyone who isn’t tone-deaf or hard of hearing or suffering from a debilitating brain disorder.

But for me, bio-pics about classical musicians offer me more than a musical soundtrack.  While we watch these movies, we might even see ourselves reflected in the real-to-life characters.  True, the filmmakers and playwright of “Amadeus” took some liberties by turning Antonio Salieri into Amadeus Mozart’s archrival.  But this is done for the sake of building a story arc. Besides, F. Murray Abraham does such a fine job narrating the movie from the point of view of the archrival (who was alleged by some to have poisoned Mozart).  We feel sympathy for his lack of genius and his frustration witnessing a genius child-man treat music frivolously.

If you have seen the movie, you already know the plot, which follows Mozart during his early adult years to his death when he was buried in a mass grave. Of course for the sake of the film’s length we only see the high points and controversies of the composer-musician’s life.  We see the operas, but not Mozart’s membership to the Freemasons.  We see his struggles with the court’s musical protocal, and even of an indendent music contractor.

Tom Hulse brought Mozart to life for many of us who would have never picked up a Mozart recording in our lifetime.  The filmmakers did more for the promotion of Mozart’s music than Don Campbell’s “Mozart Effect” book and I know people who still watch repeats of the movie today, mostly musicians and lovers of classical music.

We’re probably no closer to understanding the inner workings of the 18th century composer’s mind or heart, but we feel his humanity when we watch “Amadeus” and we are gifted with some of the most powerful healing music on the planet.  We learn a little about Mozart’s genius, but the movie doesn’t dig too deep into metaphysical or spiritual realms, such as the Source of the music.  Still the images and sounds from that movie, especially Tom Hulse’s version of Mozart’s unusual laugh stick with me. And I love how Mozart’s music was woven into the film’s story arc. 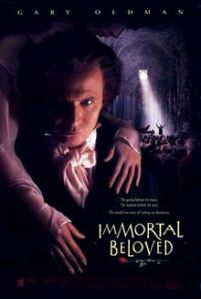 I just watched “Immortal Beloved”, about Ludwig Van Beethoven,  which is also narrated by a colleague, Anton Schindler (Jeroen Krabbe).  A mystery lies at the center of the film revolving around Beethoven’s secret affair.  And you don’t learn about the identity of his immortal beloved until the end of the movie.  I won’t give the ending away.

In many ways “Immortal Beloved” echoes “Amadeus” with a narrator revealing a mystery at the core of the story.  The story of Beethoven’s life, including his childhood dealing with an abusive father (some experts believe that the root of the composer’s deafness was when his father beat the young musician), and his affairs with women are told in flashbacks.  Similar to another music movie, “The Red Violin” viewers are given fragments that come together as a jigsaw puzzle by the movie’s closing credits.

Viewers are shunted back and forth through Beethoven’s life, but none of this narrative is confusing.  We are too engrossed in the mystery of a letter bequeathing the great composer’s estate to his “immortal beloved”.  The filmmakers send us on a wild goose chase, tossing out two red herrings along the way, and yet, by hearing the stories revealed by the composer’s love interests, we glean the humanity of the musician.  Was he a bitter frustrated abusive man or a sensitive human being wounded by his father’s abuse? And if you were a musician, how would you deal with hearing loss?

In this movie, we are shown a fragile side of the composer, mainly through how the other characters treat him.  We see him mirroring his father’s drunken rages after the composer takes custody of his nephew.  We see children attacking the deaf composer in one scene and his drunken body lying on the street next to what appears as a puddle of his urine.  We see many episodes as bombastic and vulnerable as Beethoven’s music and then we are asked to withhold judgement until towards the end of the movie when the composer’s Ninth Symphony is performed to an enthusiastic sell-out audience.

Similar to Tom Hulse’s portrayal of Mozart, Gary Oldman channels the spirit of Beethoven in his performance.  I wonder if anyone else who has seen this movie now associates Oldman with Beethoven.  I know I do because of his brilliant interpretation and portrayal of the German composer’s life.  I’m not an actress, but know enough about acting to witness a peak performance as happens with both Hulse and Oldman.

So in closing, and not giving too many details of the movies away, I urge you to watch these movies or revisit them.  This time when you watch them allow yourself to not only feel the music in your heart, but also the humanity of the classical composers.  When you see how much you have in common with them, you will appreciate classical music. And if you’re the type of person who thinks of Bach and Beethoven as stuffy old guys in wigs, I think these movies will change your attitude and your tune.