Remembering the band The 10,000 Maniacs

December,  1986–I arrived in Jamestown, New York around 2:00 p.m. on Saturday.  I felt exhausted from enduring a 2/1/2 hour bus ride from Buffalo (in the snow). I wasn’t expecting a town of 40,000 inhabitants, but a picturesque farming community that resembled all those winter postcard towns we passed on the way to Jamestown.  I traveled to the Upstate New York from Ontario, Canada to interview the 10,000 Maniacs, but after I booked my bus tickets, I received word that Natalie Merchant, lead singer for the band at that time, had other plans that weekend.

I decided that it wasn’t a total loss because I could still interview the other band members.  Faced with the choice of dropping the story or practicing experimental journalism, I took the more adventurous route.  But enduring a two hour layover in the Buffalo bus depot and then a bumpy bus ride with a full bladder for another two hours started me off on the wrong footing.

When I entered the band’s practicing studio (after checking into the only hotel in town), I had no questions, no tape recorder, and no idea what I had gotten myself into.  This story documents my short stay in Jamestown during an icy December and it reads more like fiction than a who’s who of alternative rock music.  Incidentally the article on the 10,000 Maniacs never received publication.

I learned that Jamestown was settled by Swedish immigrants and at the time of this story, 1986, most of the town’s citizens farmed or made furniture.  They were buried deep in Swedish traditions even though I didn’t witness any of those traditions at that time.  However, I did pick up that the townspeople felt weary of outsiders, especially journalists.  Even though the town boasted 40,000 strong, the residents knew who belonged and who didn’t.  I reached the conclusion that no one would coddle me unless I had a cousin or other relative related to them.

I remember the Maniacs saying that Jamestown’s manufacturing community shared many things in common with Manchester, England, without the Housemartins or The Smiths.  To this day, when I try to picture Manchester, I see factory-lined streets covered in ice.

The band practiced and composed the music I came to enjoy in a boarded up shed in the middle of a vacant parking lot.  Most people would have driven by the shed without giving a second thought, but it was what happened inside the shed that held any significance.  The musicians piled in, set up their gear, a few floor heaters and a soundboard.  They transformed the shed into a home for five musicians who only had each other to bounce ideas off of since a music scene in Jamestown didn’t exist at that point.

Sitting in a corner, I observed The Maniacs minus Natalie work on grooves for new material.  Of course, when the cat’s away, the mice play and smoke pot. Since Natalie as missing her fellow band mates proceeded to get drunk and stoned while they lamented about their various frustrations.  Guitarist/songwriter John Lombardo had left the band for greener pastures, the record company was expecting a follow-up to “The Wishing Chair” and the band still hadn’t chosen a producer for the new album.

Keyboardist Dennis Drew explained, “The band wants a more accessible sound.  The new record would be based on emotions rather than intellect.  We could work with Joe Boyd again, but we would rather work with a producer who will help us be more accessible.”  In short, the band grew tired of touring vagabond style.

As we all know, change represents a slow and painful process.  The band still recovering from Lombardo’s departure found new faith in each other’s abilities and even though a more accessible path had been forged, the band still experimented with different sounds.  After all, guitarist and band founder Rob Buck (no relation to REM’s Peter Buck), was instrumental in introducing the band to jazz tonal structures and jigs to the Maniac sound.

Dennis explained, “Rob has been experimenting with music since day one when he and Natalie were working on collaborations.”  That was during 1981-82 when an underground art and music scene thrived and before Jamestown took on the image of an artistic ghost town.  A network of musicians and artists hung out in artist Stan Sewell’s loft.  The Maniacs played dissonant music that resembled Bartok or Cage back then—hard to imagine now.  Those barebones of musical skeletons later developed into the flesh which brought the band fame nearly a decade later.

The practicing session, not all that exciting, winded down around 9:00 p.m. when the band members dispersed into the freezing night.  Paul, the soundman and bassist Steven Gustafson left for a bar that Dennis and I would meet them at later.

Meanwhile, Dennis took on the role as my tour guide.  We drove down the snow-lined streets of the town.  We passed the lot where Maddox Table Factory (inspired one of the band’s songs) once stood.  I asked if Natalie had worked in the factory wondering where her inspiration for the song derived. 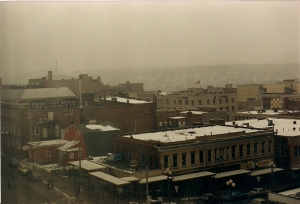 Hand on the wheel as he negotiated the icy street, Dennis responded, “No, actually she had overheard two workers talking and that later developed into the melody line that was later arranged by the band.  A repetitious machine like quality came out of the arrangement giving the song a mechanical beat.  That wasn’t an idea we had while arranging the song, but a result of the collaboration with Natalie’s original idea and the band’s arrangement of it.”

Suddenly my curiosity set in and I asked questions about all the sites that became subjects of the band’s songs.  What about Lilydale and the Lakeside Cemetery?

Moments later, we arrived at a bar that resembled the one from the TV show “Cheers”.  We met up with Paul and Steven who announced that all the freaks in Jamestown hung out at the bar.  “You have to come to this bar to see all our friends,” said Dennis.  Two friends entered the bar as if on cue.  Joe, a newly elected president of his friend’s yacht club (Jamestown is landlocked) came over to our booth.  Rick, a world-traveler and high school English teacher followed close behind Joe.  We squeezed our bodies into the booth and discussed theatre (which I was studying at the time in Ontario), politics, the war between the sexes, Jack Keruoac and the Beats. 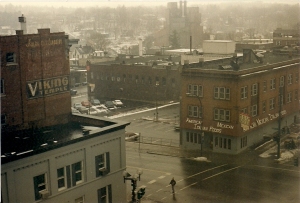 As the evening wore on, Lilydale was mentioned as an actual place and in fact, featured a large sign boasting the claim that it was “The World’s Largest Spiritual Center for Mediums,” but I learned that even though Natalie had written a song about the place, her lyrics were based on secondhand experience.  She had never stepped foot in Lilydale.

Even though exhaustion had set in, Rick and Dennis started the topic of skeet shooting.  “Let’s go skeet shooting!” “Nah, I’m too drunk and I’d probably shoot someone’s eyes out.”

I responded as my eyes blurred and I started nodding off, “I’m too exhausted from the bus rides and the long day.”  I gazed at the men with vertigo in my eyes (and later this scene from my life would inspire the name of my musical act Vertigo Bus).  “I’m going back to my hotel and sleep.  Can we continue this interview tomorrow morning?”

Dragging myself to the hotel, I crawled into bed worrying about how I would write the article based on my experiences thus far.  Muttering words about experimental journalism, I fell asleep in that drafty hotel room.

When I woke up on Sunday morning, a Beatles’ cartoon aired over the radio instead of the broken television set.  Since I wanted to feel important I ordered room service.  In return the room service brought me burnt pancakes.  The words to the song “Lilydale” swam in my thoughts and I wanted to know why anyone would write a song about the spiritual center and the cemetery grounds.  I phoned Rick and Dennis so we could finish the interview over lunch.

Rick met up with me and we waited for Dennis to get out of church.  I thought of the irony of small town America where people get plastered on Saturday night, but show up at the local church on Sunday morning.

We finally met up at an eatery located above the bar we inhabited the previous night.  Even the radio station played the same classic 1960s tunes from the previous night.  I started off with asking the question, “Did the band come up with the music or the melody line first?”

Dennis replied between mouthfuls of food, “A lot of our songs 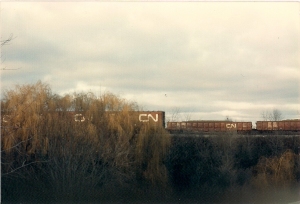 developed out of ideas that Natalie brought in…but there were times when the band came up with an arrangement first and then she worked in the melody line.  ‘Among the Americans’ used to be an instrumental that we played for two years.  Then one day, Natalie came up with an Indian theme.”  The musicians added the Indian-like drum sequence after Natalie developed the melody line.

The interview lasted through a bottle of champagne, lunch and a few hours in which a waitress left and returned complaining about a swing shift.  I had a lot of traveling ahead of me so I exchanged good bye with Dennis and Paul, who had joined us for lunch.  Rick and I hopped into a station wagon and headed to Canada, my home at the time.

Driving through postcard towns, I took special note of the Lakeview Cemetery and Lilydale.  The three hour drive became a blur of songs from The Maniac’s “Wishing Chair,” philosophies that only a 22-year old journalist could invent and endless talk.

My glimpse of Lilydale left an impression—the large sign boasting the spiritual center which include a group of Victorian homes set around a foggy lake.  Even the mailboxes listed the occupants as “mediums,” no surprises there.

Many years later I too would learn to read Tarot cards, but at that time the mediums only aroused my skepticism.  But did any of them predict The 10,000 Maniac’s bright future, the MTV Unplugged sessions and that Natalie would leave the band to pursue a solo career? Would they have predicted that my article never saw publication? Perhaps I didn’t want to know what lied ahead.  At 22-years of age, you just expect all your dreams to unroll at your feet and the world to shower praises upon you.